When is the last time you looked at yourself in the mirror? I don’t mean just to brush your hair or apply makeup. I mean really looking at your reflection; without makeup or even clothes? How long did you look? Did you say anything to your reflection? Was it positive or negative?  We (especially women) are taught from a young age that there is a certain standard for beauty and if we don’t live up to that, we are “less than.”

When I was in my teens I wanted to be a model. I looked at teen fashion magazines and tried to imitate what I saw. I spent all my allowance money on makeup and clothes.  The summer I turned sixteen, I measured six feet tall.  Maybe I could be a model,  but my mother was a drunk and me having a modeling career was the last thing on her mind. Most models start out in their teens and are made to look older (who knows why that is). All the supermodels I read about started out very young and I wanted to be them.

I lived in Miami, Florida when I was twenty and still had dreams of modeling someday (even though I would be considered old by modeling standards). I don’t remember how I found out about runway modeling for a local department store, but a few months later I was wearing wedding dresses at a bridal fashion show. I got the gig because of my height. There would be no need to alter any of the dresses I wore. After that was over, I decided I would pursue modeling as a career and find an agency to represent me. I took professional photos and brought them with me to my interviews. Actually Miami doesn’t have a lot of modeling agencies but I figured it was a good place to start. I think I went to three altogether and each one gave me the same response:

Get my nose fixed (there is a bump on the top of my nose leftover from a fall where I broke my nose as a teenager and it was never fixed. Remember my mother was a drunk and as long as it wasn’t her nose that was broken, it wasn’t her problem).

I couldn’t afford to fix my nose but I could go on a diet. At one point I weighed 118 pounds and could fit into a size 8 dress, which is the standard sample size sent out by fashion designers. I was still turned down for magazine work but I got another fashion show gig; this one was for the new Hertz-Rent-A car uniforms. I guess it was a big deal because there were men from all over the world attending. It looked like something from the United Nations because they were seated at tables wearing earphones that translated what was going on, into their native language. I made a whopping $250 for three hours work, which was a lot of money back in the late 70s.

Most of my days was spent going to “cattle calls” and sitting in waiting rooms with teenage girls competing for the same jobs as me. I worked in restaurants at night to pay my bills. The rest of my time, I thought about food. If I wanted to be a model, I had to be skinny and that meant no eating. I sure missed food though. I was hungry all the time and working in restaurants didn’t help.

Then I got married and had a baby. Not only did I gain weight, I had boobs for the first time in my life. I took a year off from looking for modeling work and when I lost the weight, I went back to the only agency that would work with me. I was told I now had another problem; my boobs were too big. Big boobs were not fashionable back then; it would be another five years before they were. I was disappointed to say the least, but by now I was used to being skinny and thinking about food all day. Then one day a friend took my picture wearing a two piece swimsuit.  When I looked at myself in the picture I was shocked! My collar-bone stuck out and I looked like a skeleton. I didn’t look healthy. Right then I decided to eat a sandwich and forget about modeling. I like to eat and if I wasn’t good enough to model weighing 135 pounds, then I quit.

But that didn’t mean I wasn’t critical about the way I looked. I now looked at fitness magazines and wanted to look like the women on the cover, so I joined a gym and lifted weights. I mean, I was pumping iron! Fifty pounds to be exact. Ok, so I wasn’t a female Arnold Schwarzenegger but I looked good, so I continued going to gyms most of my adult life, not only because I thought I looked good but I felt good.

In 2010 I was diagnosed with cancer. Most of 2011 was spent lying down because it hurt to sit on my butt which is where the tumors were.  I stopped going to the gym. I did do some yoga but not much. I was too tired and I didn’t feel good; cancer has a way of doing that. After three surgeries and a permanent colostomy bag, I have still not gone back to the gym but I do exercise and practice yoga.

Now when I look in the mirror, I see a whole new “me.” My nose still has that bump, along with an assortment of scars, wrinkles and bulges I never had before; I won’t get any modeling jobs anytime soon and you know… that’s ok. I decided I am perfect just the way I am. I always was! Ok, I will admit about a year ago, I was in an antique store and found some earrings I liked. I put them against my ears and looked in a magnifying mirror sitting on the counter. Big mistake! I didn’t see the earrings, only some old woman staring back at me. I almost passed out! That day I learned to never look at myself in one of those mirrors again, unless I am tweezing my eyebrows or that darned mustache that mysteriously grew out of nowhere three years ago. 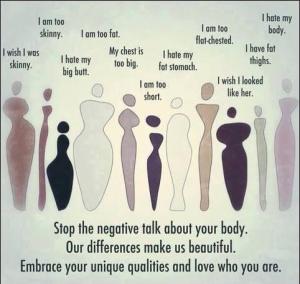 We all come in different shapes and sizes and we are ALL beautiful just the way we are. If we are lucky enough to grow older our bodies will change. Guaranteed! It’s in the owners manual; even if your young and you lost your hair from chemo, or are missing some body parts, like a breast or two, who cares! You are a hot babe! The ones who say differently are the ones selling diet plans/pills, plastic surgeons, and the fashion industry. I decided a few years ago that I decide what I want to wear and what looks good on me, not Vogue; not Glamour; not Cosmopolitan or Shape magazine. There is no “age appropriate” hairstyle or clothes. If I like it, I wear it. I am beautiful just the way I am and so are YOU!