I met Gloria in 1989. We were “older” students attending junior college. We both had kids and husbands. We both loved politics and wanted to make something of ourselves. I divorced before I graduated and Gloria did the same a few years later. I went on to study at a university in the Bay Area, a hundred miles away and Gloria stayed in the Valley. We eventually drifted apart.

Gloria told me she had a nervous breakdown a few years before I got sick and was on medication for depression. Within a few months our conversations began to revolve around her “problems.” Before I knew it she was calling me four times a day with a new crisis. I wanted to be a friend to her, after all she was my support system when I was going through hell. I figured somehow I could help her get through the hell going on in her mind. I don’t know when it happened but I stopped being her friend and became her counselor.

One of the things I learned while I was in cancer treatment was that managing stress is extremely important. I wanted to share what I learned with Gloria. She seemed to understand what I was talking about, intellectually that is, but in practice — no. The drama continued and seemed to escalate. I felt she was putting herself in  dangerous situations. Gloria seemed to not only attract drama, she seemed to get a thrill out of it. It upset me.  I found myself dodging her calls. Thank God for caller ID! I didn’t know what to do. On the one hand we were friends or were we? I hadn’t read any Buddhist literature yet, but I read lots of books about living a healthy life: body/mind/spirit. They all agreed that we are each responsible for our own behavior and taking responsibility helps us to stay healthy.  I had been doing that with my food choices and lifestyle habits. I wanted to do the same with my thoughts. I guess I wanted Gloria to do the same.

December 2013 I finally had enough. As hard as it was, I had to let that friendship go. It wasn’t a pretty ending either. Gloria was incensed. How dare I “break up” with her after all she had done for me when I was sick. I knew I did the right thing though. I had to think of my mental health first.

I got a phone call that Gloria died last week. Her friend who had grown up with her told me all the sad details of how her life had become such a shambles. I had heard those stories a hundred times before from Gloria. By now I was studying Buddhist philosophy and not only was I learning that we are responsible for our life choices but clinging to our past is bad for our well-being as well. There is so much written how living in the past or future causes unnecessary suffering. Gloria couldn’t move on. She constantly lived in the past. She couldn’t let go of her anger. If you ask me, I think her refusal to “let go” contributed to her depression. Her negative thoughts became her  addiction. Drama was her addiction. She didn’t hear me when I told her that true peace had to come from inside her. She clung to the belief that if everyone behaved the way she thought they should toward her she would be happy. We cannot control what happens to us, but we can only control how we react. Cancer taught me that.

I did a lot of thinking about Gloria this week. I am sad that Gloria never saw what her thoughts were doing to her. On the other hand she was a good teacher for me. I knew that I didn’t want to go down the same road as her. I am not saying that I don’t get pissed off sometimes or blame someone else for my circumstances but those times are getting fewer. Meditating and studying Buddhism helps keep me on track during those times.

I want to share with you some of my favorite quotes that resonate with me… maybe they do the same for you. 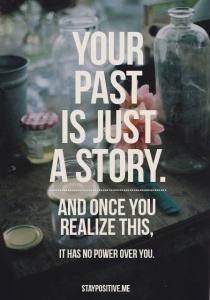 * Gloria is not her real name