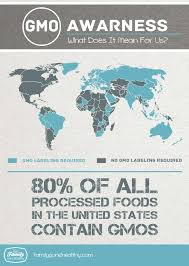 This month is almost over and I have not written about GMOs (genetically modified foods) yet. Shame on me! I am a huge opponent of anyone messing with our food supply, especially when they influence our politicians to get their way… meaning “making sure they make billions of dollars and do not have to tell consumers what they are doing.” Can you say deceptive advertising? How about unethical?  Hopefully, most of you know about them, but in case you don’t…

What are GMOs? To answer that question I will let Monsanto tell you in their own words. I swiped this directly off Monsanto’s website: Genetically Modified Organisms (GMO) – Plants or animals that have had their genetic makeup altered to exhibit traits that are not naturally theirs. In general, genes are taken (copied) from one organism that shows a desired trait and transferred into the genetic code of another organism.

Who and what is Monsanto?

Monsanto is one of the largest pharmaceutical and agricultural companies that produces genetically modified foods and seeds, drugs, chemicals, pesticides and herbicides. This multibillion dollar company has other branches in 100 different countries and is the main producer of genetically modified crops and seeds in the world.

Monsanto was declared the third most hated corporation in 2014. Why is that you ask?

In a Harris Poll this year measuring the “reputation quotient” of major companies, Monsanto ranked third-lowest, above BP (BP) and Bank of America (BAC) and just behind Halliburton (HAL). For much of its history it was a chemical company, producing compounds used in electrical equipment, adhesives, plastics, and paint. Some of those chemicals—DDT, Agent Orange, polychlorinated biphenyls (PCBs)—have had long and controversial afterlife. The company is best known, however, as the face of genetically modified organisms, or GMOs.

Next week voters in several states will decided whether or not GMO foods should be labeled. Monsanto, other chemical companies and the grocery manufacturers association are pouring millions of dollars into misleading and deceptive advertising to scare these people from voting yes. It worked in California two years ago and they are hoping it works again. If you think our government will do the right thing and have these foods labeled, forget it. Michael Taylor, the former vice president of Monsanto now runs our FDA. Who do you think he will side with? President Obama appointed him. Shame on him!

In the menu section of my blog  you can find companies who are GMO free. The only way we can make change is to vote with our wallets. It is up to each of to educate ourselves as to what is in our food.  The buck stops with each of us. There are many reputable websites who already did this for us as well. Here are a few:

Before I forget here is a list of “natural” food companies who pretend to care about your health and also give millions to make sure you don’t know what you are eating. I stopped buying from these companies months ago and will never be their customers again. There are too many legitimate companies who deserve my dollars instead.

Be Well and Be a Savvy Consumer,