Over the next week I was given four pints of blood and went through a battery of tests. I was staying at a teaching hospital which means, every day a group of resident doctors showed up in my hospital room taking notes, and asking to look at my caboose. Whatever modesty I had before my hospital stay was gone by the time I left.

A colonoscopy revealed I had rectal cancer. After the test was done, a nurse presented me with a Polaroid picture of my colon. (Who the hell wants a pictures of that? I should have kept it though and made copies and sent them out as next years Christmas cards). The cancer looked to me like dryer lint, grey and fuzzy. A few hours later an MRI showed the cancer had spread to my liver. I didn’t just have rectal cancer; I had STAGE FOUR rectal cancer!

Shit! I was pissed!

My son and my hubby were devastated by the news, but I refused to get upset. I was determined to survive, so I spent my time marching around the halls of the hospital, wearing my Ugg boots and a hospital gown, waiting to hear what kind of plan my medical team came up with. I told my family and doctors to never say the word “cancer” around me, but they could call it the “c” word. Maybe I had cancer, but I wouldn’t let it define me. The blood transfusions gave me energy and I didn’t feel sick anymore, except for that persistent diarrhea. I joked with the nurses and tried to watch television to pass the time; waiting for my doctors to come up with a plan to kill the cancer growing inside me.

One night a nurse came in to see me. She wanted to know if I was alright.

“How can you be so positive after getting such devastating news? Patients usually fall apart and can’t stop crying. We have to give them medication to calm down, but you seem happy.”

I thought about it for a minute. I figured she thought I was in denial and maybe “psychologically” speaking I was, but in my mind I refused to believe that this cancer was going to kill me.

I said, “I’m only 56 years old and I’m not ready to die. I will do everything I can to stay alive and having a positive attitude will only help. Besides, I was never much of a ‘crier.’ I’ll get mad before I start crying and if you do see me crying, it’s because I am really mad!”

A few days later my medical team (I called them my Dream Team) came back to my hospital room with a plan; they would resection my liver, and then give me chemotherapy and radiation to shrink the tumors, so eventually my colon could be removed. In its place would be a permanent colostomy bag.

Now that’s a plan I could live with. 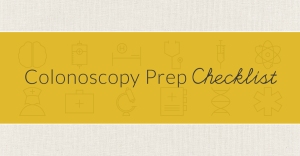 You made an appointment to get your first colonoscopy after you got your colostomy or ileostomy bag. You got your drink mix and you are all set to go, or at least you think you are. But did you get a LARGER bag from the ostomy nurse? If you didn’t, you could be in big trouble — as in cleaning up shit off your floor because your normal size bag broke from all the junk coming out of you.

When I got my first colonoscopy after getting my ostomy bag, the nurse gave me a set of instructions on what to do the night before. There was no mention of needing a larger bag. Luckily, my obsessive, questioning thoughts came in handy this time and I researched online if I needed a bigger bag. Guess what! I did. So I immediately called my nurse and told her to get me a larger bag. Believe it or not, she gave me a hard time about it! She didn’t think I needed one. I couldn’t believe her attitude so I pulled my “Bitch” card and let her know I would be “prepping” for the big event in HER waiting room. Guess who got not one, but two larger bags?

Sometimes you have to demand things, especially from those working in the medical community. They can come off as know-it-alls. Don’t feel bad about standing up for yourself. Its your body and you will experience the consequences, no one else. In my case, I was right. The larger bag was the right size to hold all the output. When you take a laxative like the stuff you drink before a colonoscopy, you have limited time to empty the bag. The poop is runnier as time goes on and is messier to clean up. You have enough to deal with without mopping up the floor.

Get a bigger bag.

How many of you look at your poop? I must confess I never really did until I had trouble. I knew when I had diarrhea and constipation (I suffered from that chronically for a few years right up to my diagnosis) but it never dawned on me to look what was going on.

One of the (rather two) red flags are blood in the stool and poop that comes out looking like ribbons. I had both.