Today I attended the March Against Monsanto event, hosted by Occupy Long Beach in Long Beach, California. This is the third year I was invited to speak about genetically modified foods and how it affects our health. Since most of us who showed up, already know about the effects of GMOs on our health, I focused on our representatives and their intimate relationship with the biotech industry.

We had a good turnout and I took lots of pictures. Instead of going in to what I said, I copied my speech and you can take a look for yourself. 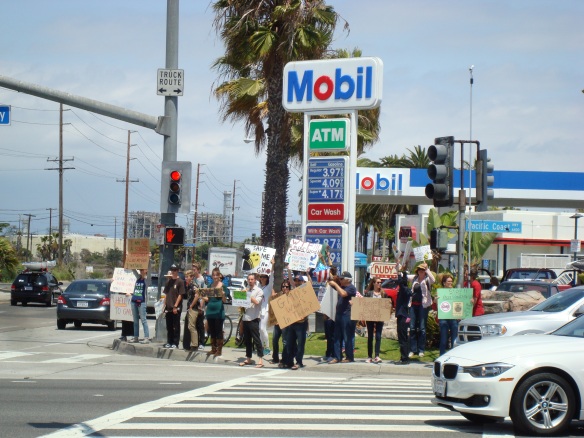 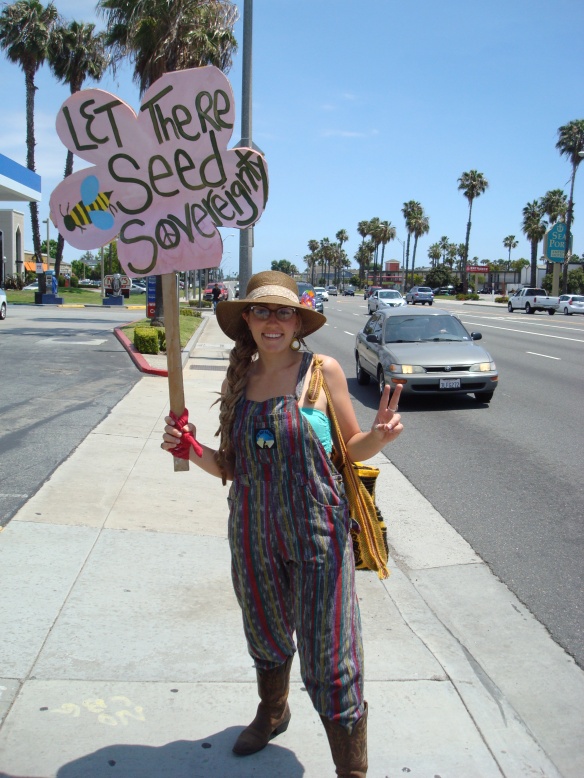 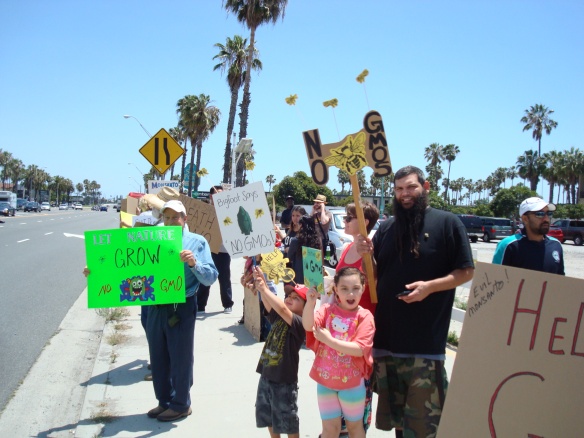 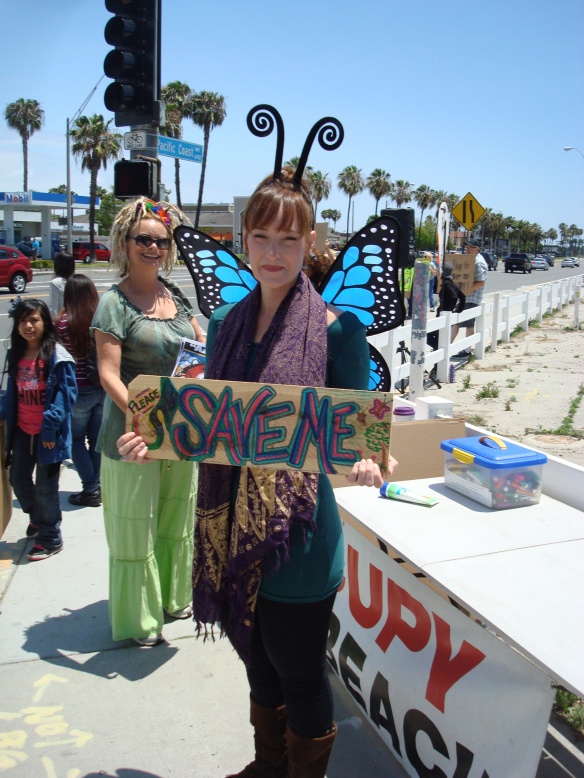 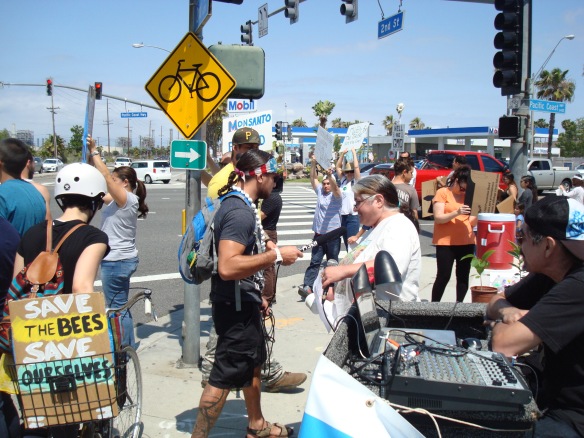 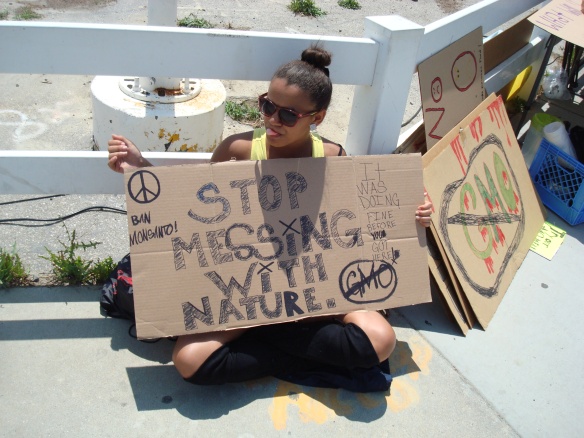 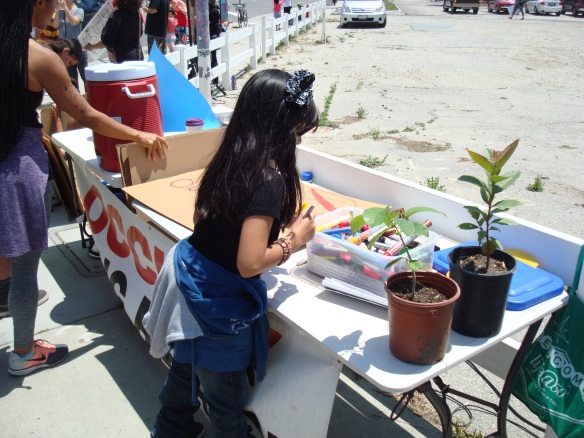 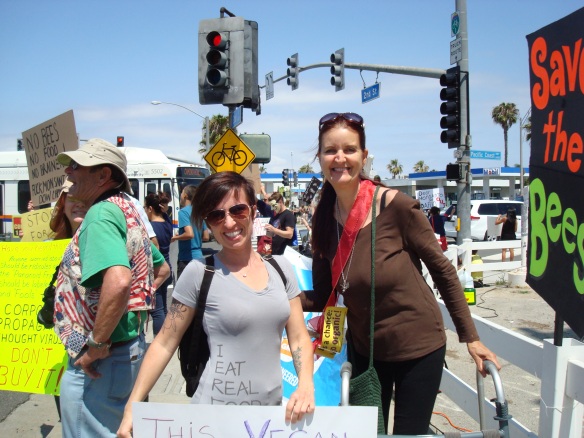 That’s me on the right with my vegan friend and animal rights activist. 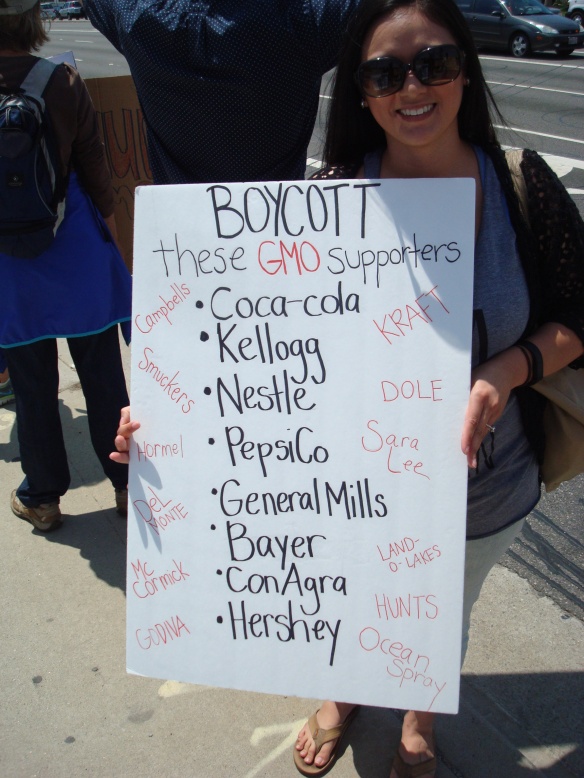 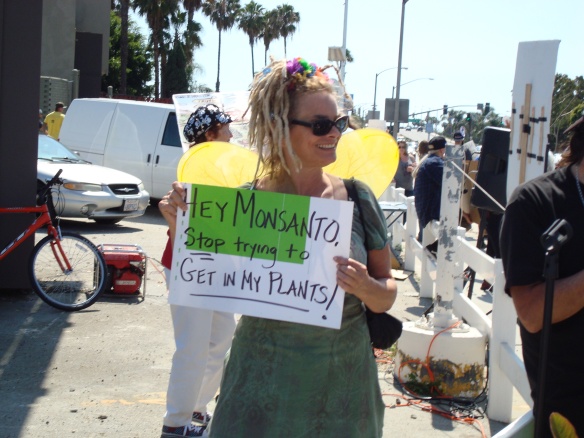 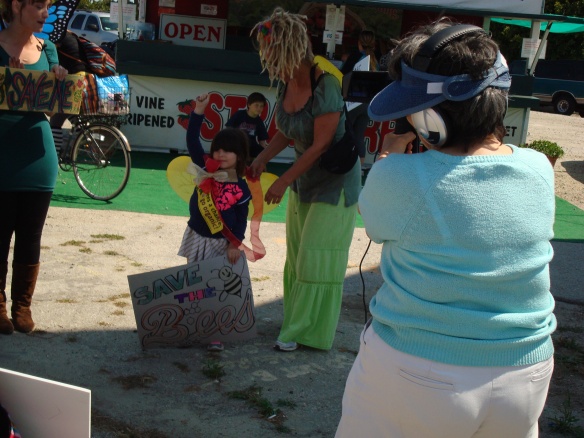 This was a family event that included the best bee costume. Our winner was probably around four years old and wasn’t aware she was in a contest. The crowd applauded loudly when she won and I wasn’t sure if she was about to cry from all the noise and attention. Luckily, her mom was there to explain what had just happened.

“Thank you all for coming today to spend part of your Memorial Day Weekend to get the word out about Monsanto and genetically modified foods. There a couple of things I want to share with you today. Some of its good news and some of its bad news. I will start with the bad news so I can leave you on a positive note.

An article written in 2013 by the Huffington Posts states:
Monsanto, Comcast and oil refiner Valero all signed on as clients of the Lincoln Policy Group., owned by former Senator Blanche Lincoln, a Democrat from Arkansas. She left the Senate in 2011 after losing her reelection bid, and started her own lobbying group. http://www.huffingtonpost.com/2013/10/16/monsanto-blanche-lincoln-_n_4110750.html

Here is a list of other Congressman on Monsanto’s payroll:

A Food and Water Watch document from 2010 revealed that the Food and Agriculture Biotechnology spends more than a half a billion dollars to influence Congress every year. They are actively fighting to eliminate or prevent labeling on genetically modified foods in the United States and preventing other countries from regulating
GMOs. These efforts have dovetailed with lobbying to tighten intellectual property law protections over patented seeds and animals, in attempts to further benefit the biotech industry.

And here’s the really bad news:

The Senate voted 62-37 to pass Trade Promotion Authority (TPA), also known as Fast Track, for the Trans-Pacific Partnership (TPP) and any other free trade deal that arises over the next six years. They passed a highly unpopular piece of legislation at the 11th hour on the Friday night before Memorial Day weekend when they thought no one was paying attention. It will now go to Congress for a vote. Call your Congressman and tell them to vote no on the TPP.

In case you don’t know what the TPP means: It’s a global trade agreement that allows corporations to have power over a country’s right to make laws. Example: Any country or state which makes a law that they believe impedes their right to make money; like labeling foods, they can sue them. An International tribunal will decide the outcome. BTW, members of this tribunal will not be public knowledge.

Food manufacturers care about their bottom line more than pleasing Monsanto and biotech. If their food products don’t sell, they don’t make money and that’s where YOU have the power.
You decide which products you buy. Tell the manager where you buy groceries that you want more NON GMO foods to choose from. Tell him or her You want more organic foods. They will listen to you. They want to get your food dollars and they know if they don’t sell what you want, you will shop somewhere else.

Shop at farmers markets and ask for pesticide free and organic produce.

If you don’t know which foods are GMO free, there is a website called the NON GMO Project. All products on their site are verified by them as GMO free. The list of food manufactures adding their names to the GMO free list is growing because they want your food dollars. The GMO Free project also has an app for your Smartphone so you can use it while you shop.

Go to your school board and demand they offer GMO free and organic lunches. If they refuse, pack your kids lunches or better yet, have them pack their own. That way you know what they are eating and they learn how to eat healthy at a young age.

Contact your state representatives and tell them you want our foods labeled. Tell them you will vote them out of office if they continue to favor corporations over our health.

Start NON GMO foods clubs in your neighborhood. Start your own organic gardens in your backyards. You can even have a neighborhood co-op where you each grow different foods and share them with each other.

If you are so inclined, run for local offices, making food safety and a healthy environment your priority.

Remember this; YOU have the power to stop biotech from ruining our food supply and you can do it every time you shop for food!”

I first became “aware” back in the late 80s when I attended Modesto Junior College. I was an “older” student… beginning my college path at the age of 34. I wanted to go to college and become a teacher when I was a teen, but things didn’t work out that way.  I clearly remember the day, I finally decided that I wanted to attend college… no matter what.

I was at a party with my husband (since divorced) and all the guests were college graduates — I will admit, back then I was more interested in clothes shopping than politics. The group was discussing the Sandinistas and a long running civil war … each one giving their opinion about what was going on… then the unthinkable happened… a woman sitting next to me, asked me for my thoughts. I sat frozen in my seat… no one ever asked my opinion about anything political before and I never heard of a Sandinista. I knew I couldn’t bullshit my way out, so I confessed — I didn’t know what a Sandinista was or why they were at war.

The woman actually was quite encouraging and after giving me some background about the civil war, she suggested I take a class at my local community college, if I would like to learn a bit more. So I did and I was “hooked.”

Within a year, I was joining protests where I lived, which was Modesto, California… a pretty conservative town. The majority of the city council were (and still are) active members at First Baptist Church, and made decisions that affected the citizens of Modesto, based on their faith. A chapter of the KKK held secret meetings a few miles away in the next town. For me, those two extreme ideologies (both citing the same religious text to justify their actions) were enough for me to stay busy and stand up against. It was the Modesto Junior College teachers that took me under their wing and taught me the ins and outs of successful, peaceful activism.

Fast forward to today and I am still speaking out, but usually through the written word; It’s a bit harder for me these days to march in a crowd with a walker. If you are so inclined, you can check out the political blog I write for here. I like to write about a few different topics, but food and what’s in it, is my passion.

But enough about me… you probably want to know about the book I am currently reading, “Good Citizen — Creating Enlightened Society”, by Thich Nhat Hahn.  In a nutshell… it’s a guide for activists who want to follow Buddhist teachings. I like the book and will buy a copy. The majority of books I read, come from the library — if I like it, I buy a copy for my personal library. If you are thinking about getting into activism or already are and want a different perspective, I highly recommend this book.