I haven’t updated my reading list until today. I hope you find these helpful and if you read some good books about healthy living, please leave me a comment with the info.

Be well and stay informed!
Inge 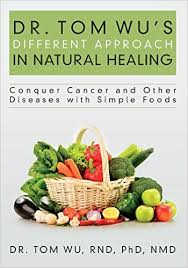 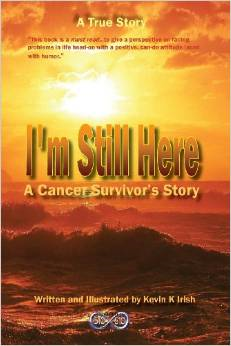 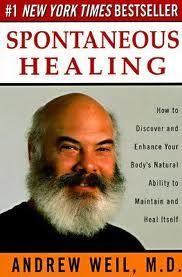 The last time I read Spontaneous Healing by Andrew Weil M.D. was probably sixteen years ago. It was right after I graduated from massage school. From the first day of class I was hooked on massage and alternative healing/medicine. I also had a part time job at a massage kiosk located inside a Whole Foods Market in San Francisco. The booth was next to the “Whole Body” department, so in between customers, I learned as much as I could about herbs and supplements by asking questions from the staff. There was also a nice selection of books they let me read in my booth.

Dr. Weil has been around since the 70s. He has a medical degree and has written several books about alternative medicine and the mind/body connection. I am in the middle of Spontaneous Healing again and came across an idea asserted by Dr. Weil to “view all illnesses as a gift.” This isn’t the first time I heard someone say that illnesses (like cancer) can be seen as a gift, because having it changes the person’s life (usually). I do agree that cancer did change my life on all levels but I won’t refer to my cancer episode as a gift. I got plenty of weird gifts in my life, so if getting rectal cancer was a gift, it was a pretty crappy one (pun intended).

In 1986, my dad died at the age of fifty-six from heart disease, which sent me into what I call, a “spiritual crisis.” After a couple of months of being in a “funk,” I went to see a shrink. She gave me several self-help books which led me into reading spirituality books. Back then the western medical profession considered such writings as “New Age” psychobabble, but was becoming more accepted by mainstream America. Western medicine still won’t acknowledge the mind/body connection when it comes to disease, except for a small percentage of doctors.

Cancer was not a gift for me but it was my “wake up” call. Even when I was working as a massage therapist and eating vegetarian, I didn’t focus on my whole self. Stress was something I constantly dealt with. I did visit the Zen Center a couple times a month to sit Zazen but I didn’t practice it on a daily basis at home. We left the City and moved to Chico, thinking that it would be quieter there. It was, but I still felt stressed out. During that time the economy tanked. My hours were cut at the restaurant I worked at. Massage wasn’t as popular in Chico as in San Francisco, so I stopped doing that. We moved again to Southern California thinking jobs would be better there. I ended up working three part time jobs which caused more stress for me. I didn’t eat fresh home cooked meals. Who had the time?

Then cancer  hit me. That changed everything. I did what everyone does who has been diagnosed.  I wanted to know why I got cancer. I thought I was healthy. The truth is I convinced myself I was but my lifestyle proved otherwise. Dr. Weil also writes how stress is a major player when it comes to us getting sick. That I agree with. It’s been proven that stress lowers the body’s immune system. When the immune system is lowered for a long period of time, all kinds of diseases develop because the body’s defense system is to weak to fight them off.  Throw in a diet that comes from a package, that has no nutritional value and you have a recipe for cancer.

Luckily, I didn’t dwell on the “why me?” question to long and instead looked for answers as to how to start from where I was at. Everything on the Internet I read about healthy living was really not news to me. It was in the books I read years before, but at the time, I guess it didn’t sink in. It looked good on paper but I didn’t put it into action in my own life. Now I get it. There is no going back to my old habits.  Meditation, yoga, exercise, mindfulness, and plant based foods are part of my daily life. My stress is almost nonexistent. I got the message loud and clear and for that I thank cancer… sort of.

Live Well and be Happy!

Isn’t the Internet is the best invention ever!  I use it every day to do my research on a variety of topics; it keeps me informed about what’s happening in my community and the world and most of all, via social media, helps me connect with people who I otherwise, would never met. Sometimes I connect with others who practice Zen Buddhism, and sit Zazen. Zen is the form of Buddhism that I am attracted to, probably because of the silence. I like sitting in silence. It’s a nice contrast to my noisy life. I live in Southern California. Traffic jams. Crazy drivers. People who are obsessed with looking trendy. Fake boobs. Fake personalities. Why do I live here? The ocean. The beach. Health food stores, great vegan restaurants, my terrific oncology doctors are here, and a variety cultures and lifestyles all thrown in to one crazy mix. And I am only a few hours away (in any direction) to experience the desert or the mountains. But the Internet allows me to travel anywhere in the world without leaving the comfort of my futon. Sometimes people even find me. 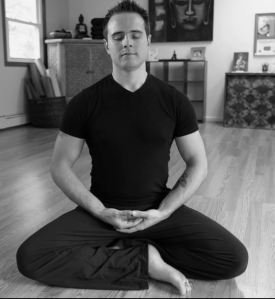 Mark Van Buren, a yoga teacher, recently found my blog (the one your on right now) and left a comment about one of my posts. I found out he wrote also wrote a book about meditation, specifically Zazen and I wanted to know more. It’s titled, Be Your Sh*tty Self and I knew right then, I had to read it. He sent me a copy. I wasn’t sure what to expect even though the title was humorous. Would it condone asshole behavior? Was it meant to be sarcasm? Mark is twenty-something and I read his generation can be a bit self-centered—and I do live a few miles away from the self-absorbed capital of the world… Hollywood! The only way to find out was to read the book.

I was hooked after reading the first paragraph:

“One day I was listening to a talk given by a Buddhist teacher, when a woman in the audience revealed that no matter how much she meditated and was aware of herself throughout the day, she was still just her same old shitty self. Her brutally honest confession cloaked in humor made me sit up and take notice. Finally, someone who felt the same way as me! I didn’t know this woman, nor had I ever met her, but I was sure as hell relieved to hear someone else was struggling like I was.”

That sounds like me! I struggle with my “shitty self” all the time (especially when I have to interact with rude, self-absorbed people. Remember… I live in Southern California, but that doesn’t stop me from being disappointed in my own behavior).  I knew I could relate to what Mark was writing about even though we are a generation apart. Many of the Buddhism books I read are written by monks and Zen priests, which is good, but sometimes they get all “esoteric” on me and I have no idea what they are taking about. Take koans as an example. I can read a Zen koan a hundred times and it still sounds like an algebra problem to me (algebra and geometry are not my best subjects). I know these writers from centuries ago are the real deal, but if I don’t understand them, how will that help me? … And keep me interested in studying Zen? I do better with contemporary writers, especially those who live in the same hectic, western world I do. I simply cannot relate  to someone who lives in a cave (not that there’s anything wrong with that). I also cuss. I can relate to someone who has a “colorful” vocabulary like mine. Not that his book is full of cuss words, it’s not, but occasionally you will find one. It makes the author human.

Be Your Shitty Self, is divided into two parts; Section I: Concepts and Beliefs. Section II: Applications and Practices. It’s easy to read, with several anecdotal stories that we all (probably most of us at least) have experienced and how to deal with a particular situation. Of course the theme is meditation and mindfulness. How many of you read books on “how to meditate” or watched videos, but the author never went in to detail about the actual experience of meditation? They make it seem so easy, but when I did it, I experienced all kinds of problems. Why couldn’t I just “sit” like the pros? Did they know something I didn’t? Why was meditating so hard? How many have given up because they think it’s too hard to do it “right”? Mark challenges that excuse:

“The excuse I hear most often from people is that meditation is too hard. “I can’t stop my mind from thinking,” people complain to me. This excuse comes from a misperception that thoughts need to be stopped when practicing meditation. As discussed prior, your thoughts are not to be annihilated—they’re to be noticed and then released.…The idea that thoughts must be stopped is not only the wrong approach to meditation, but it also fills your head with the impression that your thoughts are bad, creating an internal war between the object of meditation and your thoughts. This leaves you more tense than you were before you began. Warring with yourself is the complete opposite of what you are trying to do when you sit and meditate. Let go of the struggle. There need not be any wars in your mind during your practice. Label your thoughts “thinking” and then let them go, even if it happens a thousand times in your session.”

Yay! Finally, someone says it’s normal to have thoughts invade your meditation. Actually, another contemporary author, Brad Warner, said the same thing, but it’s nice to know there are more Zen practitioners who admit it.

So many of the conservative Zen authors come across quite formal (and that’s ok) but I am anything but a formal kinda gal. (I wear my leopard coat over my pajamas when I walk my dogs in the morning.) I like to laugh. I have a sick sense of humor and love to prank people. A sense of humor got me through my cancer treatments. I think a lot of people’s problems stem from the fact that they take themselves too seriously and don’t laugh at themselves. Mark seems to agree.

“Humor will be your best friend when things get tough, and it will allow space in your mind for the problems of life to float freely through, causing less harm to yourself and those around you.”

Mark’s book is going on the shelf to join my other books on meditation. I enjoyed it and recommend it to anyone who wants to learn how to meditate and find out what it means to live as a “shitty self.”

You buy a copy on Amazon.