This is the second year I got to attend the UCI annual volunteer luncheon. Wow! Time goes by so fast. I have been volunteering in the Infusion Center for 1/12 years already. We took  a group photo but since I was in the picture I couldn’t take a picture, so I have to wait to get my copy. I will post it when it comes in.

It’s really an honor to be a part of such a caring group of people. Two of the volunteers have been at this hospital for over twenty years. When I was getting treatment, the volunteers helped to make sure my needs were taken care of. One in particular is Bob (the person sitting next to me in the picture)…he was stationed at the valet outside the Chao Cancer Center. I had to go there for radiation and doctor appointments daily for three months. He always had a wheelchair ready for me when he saw our car in the que. He even helped pull me out of the back seat so I could get in to the wheelchair.

I had to lay down in the back seat of our car anytime we went somewhere. I couldn’t sit on my tush for seven months…the pain was too intense for words…even with pain killers.

I remember the day I walked in the Chao Center instead of rolling in a wheelchair…Bob saw me and with tears in his eyes he told me how happy he was to see me look so much better. He wasn’t sure if I would make it. When I started volunteering we  became friends quickly. Bob is a ten-year Melanoma survivor…another walking miracle. We are living proof that doctors are doctors, not psychics and that people do survive cancer…even so-called stage IV. 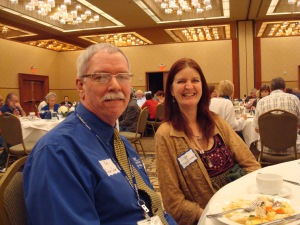 I don’t eat out very often because being vegan can be problematic and today’s luncheon was a prime example. When I got my invite via email, I said I would go but I need a vegan dish. The person who answered me said that was no problem.

The meal was banquet style and the first course was salad with grated cheese on top. I politely told the waiter that I am vegan and would like a different salad, so he left the salad and brought me French dressing. I asked another server if she could bring me a vegan salad and she did. It was actually lovely  and better than I expected. 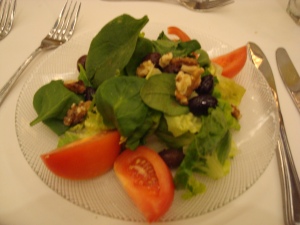 Next came the entrée. I got chicken without gravy, my table mates got gravy with theirs. Bob said maybe the waiter thought I said I am a vampire and he figured they don’t like gravy. Luckily the other waiter came over and exchanged the chicken for a plate of steamed veggies. Eating in a restaurant with a group who eat meat is a problem for vegans and most restaurants have slim pickings to choose from, so it’s easier for me to eat at home.

Did I mention I sat at the table with the volunteer doggies? That is always a treat. Pet therapy is a vital tool for patients…animals know when someone is sick and it’s well documented that animals help lower a person’s blood pressure when petting a dog.

This is my table mate Etta…she always come to work in a fashionable outfit. 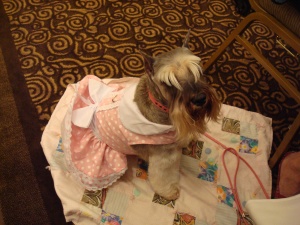 Over all it was a nice lunch and I got to get dressed up. And in the grand scheme of things it really isn’t about the food, it’s about spending time with others and being present.